On December 20, 2021, Lineage announced that it has entered into an exclusive worldwide collaboration and license agreement with Roche and Genentech, a member of the Roche Group, for the development and commercialization of a retinal pigment epithelium (RPE) cell therapy for the treatment of ocular disorders, including advanced dry age-related macular degeneration (dry AMD) with geographic atrophy (GA).

Learn more about our new collaboration with Genentech 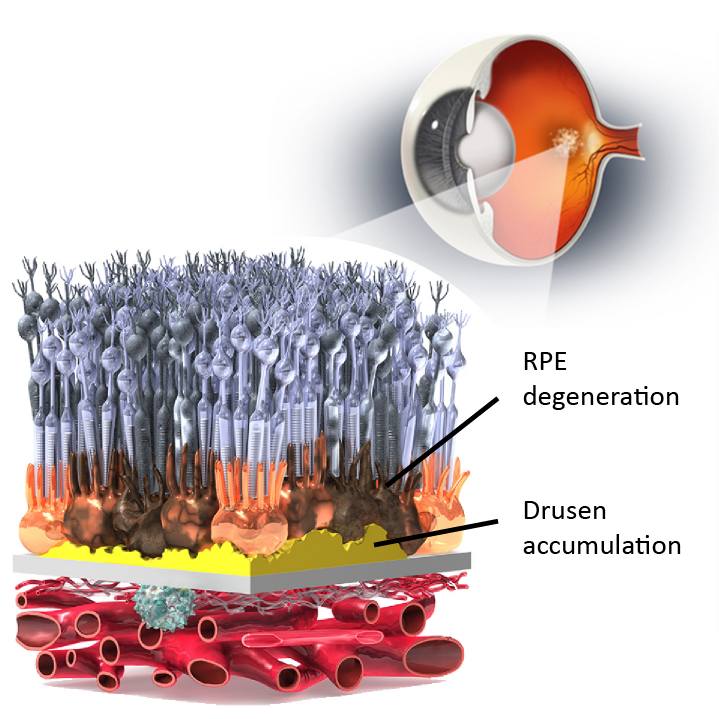 OpRegen® is currently being evaluated in a Phase 1/2a open-label, dose escalation safety and efficacy study of a single injection of human retinal pigment epithelium cells (RPE cells) derived from an established pluripotent cell line and transplanted subretinally in patients with advanced dry age-related macular degeneration (AMD) with geographic atrophy (GA). In November 2020, Lineage announced the completion of patient enrollment in this study.

The FDA has granted OpRegen with Fast Track Designations and, as such, is on an expedited regulatory path that includes the ability for increased interfacing with the FDA during clinical development and enhanced favorability for marketing approval.

In November 2021, Lineage reported that restoration of retinal tissue was observed in a fourth patient enrolled in the Company’s Phase 1/2a clinical study of OpRegen.

AMD affects more than 30 million people worldwide and approximately 1.6 million people are newly diagnosed annually in the U.S.1 It is a leading cause of vision loss in people over the age of 60 in the developed world. There are two forms of AMD: “wet AMD,” which affects only 10-15% of patients and “dry AMD,” which affects 85-90% of patients.2 Currently, there are only two FDA-approved therapies for the less common wet AMD, yet they constitute an estimated market of more than $10 billion.3

There are no FDA approved medical therapies for the 85 to 90 percent of AMD patients who suffer from the dry form. We believe one of the most promising future therapies for dry AMD is the replacement of the layer of damaged RPE cells that support and nourish the retina.

View our pipeline to see our other programs in development.